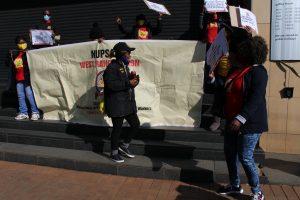 The National Union of Public Service and Allied Workers (NUPSAW) warmly welcomes the partial victory for the Community Health Workers in Gauteng Province and congratulate MEC Bandile Masuku for his decision to implement our agreement with the former Minister Dr Aron Motsoaledi and Resolution 1 of 2018 PHSDSBC. The country is indebted to the Community Health Workers who over many years went through their job with absolute integrity and honour, even when they were extremely exploited by the ANC government through the introduction of neo liberalism.

While we welcome the MEC decision to absorb Community Health Workers on DPSA salary level 2, we strongly condemn politicians who are obsessed with profit through tender bonanza in the face of the biggest health and economic catastrophe ever to face human kind. The allegations levelled against the MEC of Health in Gauteng are very much worrying. We reject the deployment of Jacob Mamabolo as the acting MEC as he does not possess any medical background like the former MEC Qedani “Life Esidimeni” Mahlangu. We view this decision as the third pandemic after Covid-19 and corruption.

NUPSAW received the first victory in the form of CCMA Advisory Award in Kwazulu Natal whereby the Conciliating Commissioner share the same view with us in that the Community Health Workers are employees of the Kwazulu Natal Department of Health. That victory led to the demise of NGO’s in the Province and Community Health Workers were all migrated to a persal system (paid directly by the department)

We embarked on a massive recruitment drive across the Provinces, establishing vibrant structures in preparation for war against the exploitation of the Community Health Workers in the country. We embarked on several marches at the National Department of Health, Provincial Departments of Health and the Office of the Presidency. In 2016 November we threatened the former Minister Aron Motsoaledi to collapse the entire CHW sector if he don’t commit to the recognition of Community Health Workers. The Minister through the office of the Deputy Director General, Ms Valerie Rennie wrote a letter responding to our grievances as follows:

The WARD BASED PRIMARY HEALTH CARE OUTREACH TEAMS (WBPHCOT) policy was adopted on the 02 November 2017 at Protea Hotel in Pretoria. This was indeed a victory for all CHWs in the country.

NUPSAW continued to have a robust engagements with the National Department and Provincial Departments of health for permanent employment. We demanded to meet with the former Minister Dr Aaron Motsoaledi and we eventually met in April 2018. In the meeting the Minister agreed that the CHWs cannot be classified as EPWP because of the nature of their job. He agreed with us that work that CHWs are doing is of permanent nature but complaint about the autonomy of Provinces. He agreed to standardise the remuneration of R3500 through a persal system as an interim solution and that CHWs will be absorbed on DPSA salary level 2 the following year. This led to the signing of Resolution 1 of 2018 PHSDSBC in June 2018. This was another victory to the CHWs in the country. Subsequently NUPSAW was removed from the Council for fighting for the marginalised. The matter of our exclusion in the Council is still at Labour Court and victory is certain.

We condemn the sweethearts union in the PHSDSBC who are hyenas but masquerading as the voice of the poor workers, when they are cutting sweethearts deals with the employer. We demand the withdrawal of Resolution 1 of 2020 which deprives an increase for Community Health Workers in the financial year 2020/2021.

2020-08-24
Previous Post: NUPSAW CONCERNED ABOUT THE SAFETY OF EMPLOYEES AT DISCHEM IN MIDRAND AFTER POSITIVE CASE
Next Post: NUPSAW STATEMENT ON THE EASING OF COVID-19 LOCKDOWN TO LEVEL 2 BY GOVERNMENT